This guide is applicable for most Polaris cards from 460 to 590, some vendors may create different PCBs or use different components but the general working principles for all of them should be the same unless specified. This guide uses a reference RX 480 as an example.

Have any questions? Need help with a specific GPU problem? Post to /r/GPURepair! 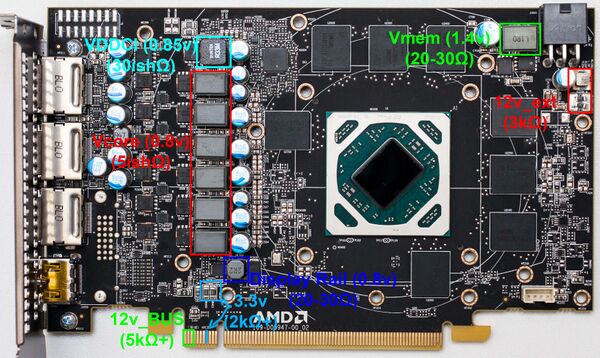 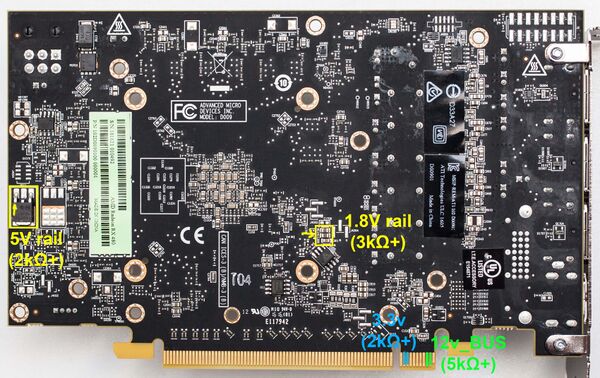 RX480 reference board back view (Figure 2)

The resistance varies from card to card and the value itself doesn't matter but it should be in the thousands+ Ω range.

The card gets 3.3V from the PCIe slot only, from the 4th pin going left from the PCIe key notch in the front, and 2nd and 3rd pins on the back going from the notch again. (Figure 1 and 2)

If you get less than 50Ω on one or multiple base rails then you have a card with a short. The computer might not turn on in such a case because the power supply is protecting itself using OCP (over current protection). Repair Guide: Base Voltage Rail Short on Polaris GPUs

The order in which they turn on in most polaris GPUs is as follows:

5V→ 1.8V→ Display Rail → VMem/VDDCI → VCore. (In some cases, VDDCI turns on after VMem, while in other cases VDDCI and Vcore are controlled by the same controller and they turn on at the same time)

If you're missing one of them, check their respective pages for more details on how they work and their potential problems:

Everything is present but still no video out? You may have faulty Memory, BIOS, PERSTB, Crystal oscillator, GPU chip itself, or in some cases a problem with straps. Also if the output of the HDMI port is a black screen, try connecting the monitor to one of the display port on the graphics card, you may be able to get an image from the display port.

If you've reached this point, the most likely culprit is the Memory. You can confirm this by testing the memory in Linux. Here: AMD Memory Testing Guide. is how to detect faulty memory chips.

If the memory is okay or the card is not even being detected in Linux then the problem is highly likely to be the bios. Check: BIOS Problems on Polaris GPUs.

Often marked with Y followed by a number, crystal oscillators sometimes fail which will lead to the card not booting up.

In most if not all Pascal GPUs, the frequency of the oscillator is 27MHZ. An oscilloscope or a multimeter with Hz function that can go above 27MHZ is needed to test it.

U100 is a multiple function gate, the output of which is determined by the 3 inputs shown in figure 3. Since input A is always high (direct connection to 3.3V rail) according to the datasheet, the output will go high only if the other 2 inputs (B & C) are also high.

Sometimes this gate can fail which results in the output Y "PERSTb_BUF" signal not getting generated and prevent the card from working.

Start by checking all inputs, if one is missing trace it according to the schematic in figure 3 and replace the faulty components. If all the inputs are present but the output is low, check the Vcc pin and make sure the gate is powered, after that, replace it if all inputs and power is present on the gate.

perhaps the card does output a picture but it is not working properly, here are the common problems and their potential fixes.

if you do not get memory errors even after 100+MB test in MATS then the core is very likely to be the issue.

just like artifacting, error 43 can be caused by faulty memory or core but also BIOS and straps.

Start by making sure the memory is fine as shown in the guide above, then check if the BIOS is not corrupted/modded (flash original bios from either TPU BIOS Library or manufacturer's site) and check the bios circuit as shown here: BIOS Problems on Polaris GPUs.

After that if the problem persists, check the strap resistors, they can either get knocked off or change in value which will trigger error 43.

If everything is fine but the error persists then the core itself is damaged.