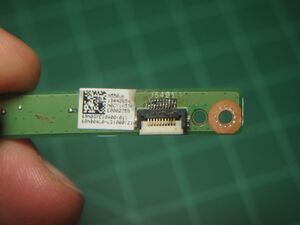 A water damaged board from under the trackpad. 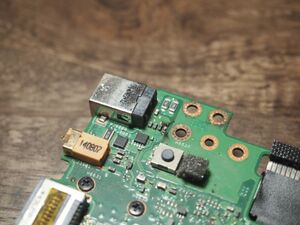 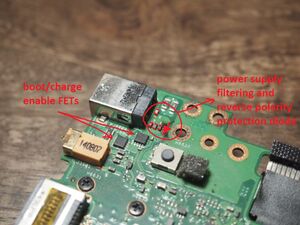 Circuit with annotations/symbols overlaid to make more obvious how the stage works.

The Asus N550J / N550JV is a series of cheap, relatively powerful laptops. They come with dedicated graphics, a good keyboard, and a great screen, but they are a little bulky compared to the modern competition.

Disassembly is pretty straightforward. Just remove the screws lining the lower lid and remove the back cover. From here, remove your drives, the speakers, and the optical drive.

If you are having irregular issues with the laptop, it could be that there is a problem with one of the power rails. There are no easily identifiable test points for checking voltages, so it's easier to start with taking a look for obvious damage like corrosion or burned parts. In many cases, it is easy for liquid to get under the trackpad and cause shorts on the board underneath. The board underneath is a totally auxiliary board and doesn't need to be installed at all for the computer to function, so if you have liquid damage, I would just recommend to remove it entirely. In the case you do have liquid damage, it's also recommended to remove the ribbon cable connecting the small board as well, as shorts can develop easily on those types of FFC (flat flexible cable) connectors and cables.

It is relatively easy to tell if you have an issue with the charging circuitry- the laptop will not charge, and it will not boot either, when connected directly to wall power. In this case, it's worth taking a look at the boot circuitry. The input stage is relatively easy to understand- it's a DC barrel jack that lands onto a big pad. In order to pass power to the battery and to the computer to boot up, there are two FETs that have to be enabled. They are enabled with the same signal that they are trying to pass (the DC voltage from the barrel connector). This seems like it would be a bit redundant to turn a signal on with itself, but there are some additional details at play here. On the landing pad connecting the DC jack to the rest of the system there are a few decoupling capacitors to filter any ripple from the power supply, as well as a reverse polarity protection diode. The diode is not rated for high currents (since the FETs have high impedance gate anyway) and can easily blow, causing the whole boot circuit to stop working. If you just want to get it going again, make sure to replace the capacitors and bridge one set of the pads (replacing the diode with a blob of solder or small wire). You'll lose the reverse polarity protection, but it's unlikely you would do that anyway as long as you're not sticking random chargers into your laptop.