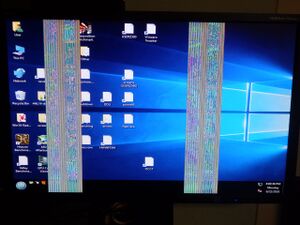 Bad VRAM on Polaris video cards can show up as 2 or more vertical bars covering the screen.

*Failed cards that have been used to mine Ether have a high likelihood to have memory issues.

It is not necessary for the memory chips to fail for those symptoms to occur. Sometimes the cause can be physical damage. Here is a video demonstrating that and how to fix it.

This usually happened on Polaris generation graphics cards as people usually flashed the card with custom crypto mining BIOS. After being flashed multiple times the BIOS can die due to maximum read/write cycle limit.

A card with dead BIOS usually easy to determine by plugging the card as secondary device and boot with IGPU or another card on main PCI-E slot. After windows loaded download GPU-Z by Techpowerup and look at the device ID section. Repeating device ID in this case 1002 67DF - 1002 67DF usually means a bad/corrupted/non readable BIOS chip. 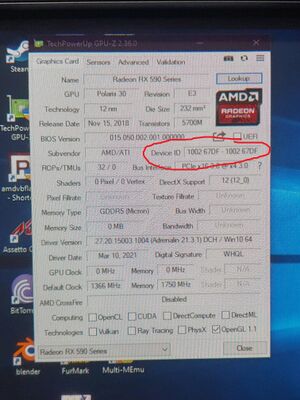 If this problem happen you need to replace the BIOS chip with the working one and reflash it with the correct firmware.

VGA Bios Collection - TechPowerUp commonly used location to find GPU Bios, please note that cards utilize a vast number of different memory vendors, is worth to double check the memory vendor name visually, if you flash a different Memory Bios it will normally boot up but shut down under load.

For this you can flash it using amdvbflash (previously known as atiflash) or externally using CH341A or similar programmer.