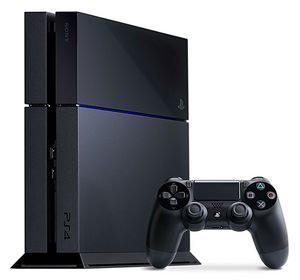 There are 3 different models of the original PlayStation 4:

The last 3 characters signify locale and hard drive size, so they're not applicable to repair.

If you're for in-depth tear down guides for console cleaning/maintenance or just want to know where a part/screw goes, check out the console teardown guides:

The Blue light can tell us many different fault conditions if observed properly. The BLOD is a general term for a blue light upon turning on that shuts off without going to a white light. There can be many sub-manifestations of this. One example is a blue light that does not pulse, that goes off after 6 seconds.

For a BLOD, you will need to time how long the light stays on, any noises, clicks, beeps, and note if the fan does spin or not.

If your console does not have any power, or attempts to power up, then shuts off (BLOD), there may be an issue with the power supply. It is helpful to test the 12V output of the power supply to help narrow down console power issues to the power supply itself, or to the main board.

When checking your power supply, be mindful that parts of the board will be live at mains (110v-240v) voltages when plugged in, and that there are high voltage capacitors inside that will hold a charge long after the supply is unplugged! Don't electrocute yourself, damage expensive equipment, or burn your home down. Repairs to power supplies are done at your own risk.

PS4 (and many other) consoles use what is called a 'Switch-mode' or 'Switching' power supply. Here is a generic overview of how these work.

When you can't remove your power supply[edit | edit source]

Power supplies for PS4 consoles output two different voltages: a 5V standby voltage, and 12V. If your console attempts to power on, then stops, the 5v standby section of the board may be fine, but there could be an issue with the 12V section. You can check for these voltages with the power supply removed from the console. The supply's output can (and should) be checked without disassembling it.

To check for 5v, remove the power supply from your console, and plug it into a wall receptacle. Measure between the 5v and GND pins, and the 'ACDC_DET' and GND pins. There should be about 5V present on both when the supply is plugged in. The pinout of the connector may vary between models. Search for an image of your particular model's main board for the pinout (model numbers are moulded into the power supply shell).

The connector that outputs 12V is the large plug on the bottom of the power supply that plugs into the two large metal blades that come off the console's main board. The power supply will not activate its 12V supply unless it receives a signal to do so. This signal normally comes from the console's main board, but we can tell the power supply to turn on by bridging the 'ACDC_STBY' pin of the connector to the 'ACIN_DET' pin (there should be 5V present on this pin). You can avoid accidentally shorting pins by plugging the wire assembly into the power supply, and bridging pins at the plug instead of the directly at the connector's exposed pins. Bridge the appropriate 2 pins at the plug with a small wire, or fine point tweezers, and probe the 12V connector to see if outputs about 12V.

A Pulsing BLOD, signifies a hardware failure that is not terminal to the process. A normal BLOD would shut down, because for example, there is a short on the 12v rail. A Pulsing BLOD, however, is still a severe failure but the console is able to stay running. One example of this is RAM amnesia, in which the RAM does not keep information, but still acts normal otherwise.

For more information, take a look at PS4 UART Guide.

For this, you can use the UART method, to listen to the console, and see what it complains about. The pin is a debug pin coming from the syscon/southbridge, that can be accessed via UART.

Firstly, you'll need to dump the flash using a programmer, then you'll need to use BwE's program to change the flag for UART functionality, reflash it, then you have unencrypted information coming out of the debug pin. If this step is not done, you will see nothing, except for a bunch of spaces in serial monitor.

For more information, take a look at the PlayStation 4 WLOD Repair Guide.

A White light of death, is a console that turns on to a stable white light, but has no output from the HDMI port. Most of the time, this can be attributed to the HDMI circuitry. In some cases, the console can shut down from a white light.

Disk drive malfunctions are a general term for a disk drive that is not functioning as intended. Not reading, grinding, no disk feed , and no power are all examples.

HDD can be removed and tested on a computer with a software such as 'Crystal Disk Info' or 'DriveDx' or 'HDDScan' to test for faults.

Anything to do with software, like error codes, problems with update, etc. Example would be a CE-34878-0 error caused by failing RAM modules.

This is for issues that don't fit in the other 8 above.