The second major console from Nintendo (Super Famicom in Japan, Super Nintendo in Europe and the USA), is the successor of the Famicom or Nintendo Entertainment System. It uses roughly the same hardware architecture as its predecessor, yet slightly improved.

This article is based on the PAL and NTSC-J(Japanese) versions of the device. Some details in this article may be different for the NTSC(US) version

The following table can be used if you use the Burn-in test cartridge.

When disassembling and reassembling, keep in mind the Tips for Reassembling page. 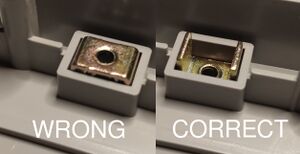 Way to place the metal inserts into the case

At the bottom of the case, there are two metal inserts underneath the PCB. On the Super Famicom the front one is shaped slightly different because of the size of the board. These inserts have to be in the right orientation for external devices (like the SatellaView) to be screwed onto the console. The thread has to be facing downwards (see picture).

Five types of screws are used in the assembly. All but one are Phillips Head screws. The outer case screw has a security head and disassembly will require a special screwdriver.

All screw types used in the Super Nintendo and Super Famicom 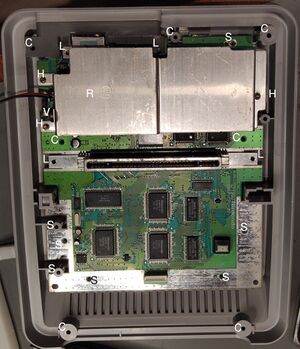 Location of screws on a SNES (SNSP-CPU-01 board)

Some models have different locations for the screws, but the general idea of which screw goes where still counts (silvery long screws only for cart connector and connector plastic at the back). Keep attention to the correct angle of the screws. Especially if the case has been discolored, the plastic may be very brittle. Try to keep the screw at the proper angle when screwing them back in. Also use the technique to find the old thread as mentioned in the Tips for Reassembling page.

There is one screws on the top part of the case, holding the mechanism that grabs the cartridge when power is turned on. This is a short screw (S) and uses a, rather big in comparison, white plastic washer.