The Lenovo x131e is a rugged low-end laptop originally released on July 31 2012, for schools and businesses. It came in a wide variety of skews ranging from AMD E series CPUs to Intel Celerons and low-class i3 processors. It was re-released as a Chromebook in 2013, despite no changes to hardware. A board view is available online for this device, though at the time of writing the author is unsure of its accuracy. 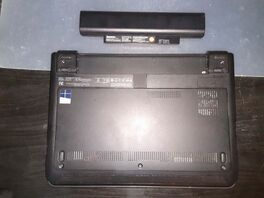 A ThinkPad x131e with the battery removed. The SIM card cover is also visible.

The laptop has a removable battery held in by two latches at the bottom. One is spring loaded, The other is a toggle. The battery simply slides out.

Some versions of the x131e were equipped with SIM slots. Removing the battery and lifting the small rubber plate in the center of the battery compartment allows access to the slot.

Three captive P1 screws hold in the bottom cover, after which the plate comes up, slides out and comes off of the laptop.

the WWAN slot can be used for a MSATA(not M.2) ssd for dual drives setup.

The ram in the laptop is DDR3 1600mhz SODIMMs. The laptop has a stated maximum of 8GBs. 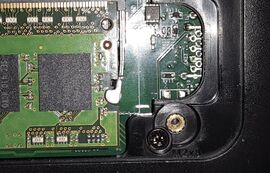 The feet on the plate at the bottom of the laptop may cave in, causing the laptop to become wobbly. the cause of this is that the piece of plastic attached to the chassis where the feet are on the plate has broken and fallen into the laptop. It may be possible to glue the piece back into place, but my solution was to fold up a fraction of paper and place it where the part should be. Whatever your solution, make sure that it is non-conductive, as components lie directly underneath the piece, or where the piece used to be. 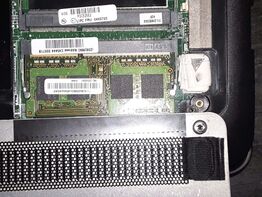 Sticking a bit of paper where the plastic would've been can work.