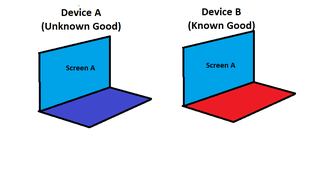 Known Good is a high-level method of testing individual parts in different devices to know if problems are arising from individual parts or with other problems in the device itself, called so because if everything is "known to be good" except for the one part being tested, it is easy to troubleshoot hardware problems. The best example that most people have done is putting the batteries from one tv remote into another.

The upside to known good testing is that often times no electrical knowledge is needed, as you are swapping out large, easily identifiable parts.

Potential problems when using the known good method of testing is the threat of destroying other devices if you are putting faulty parts into them.